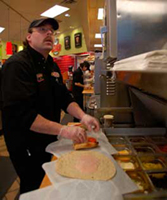 The restaurant industry continues to lead the job market in creating jobs.

The past year, eating and drinking place employment increased 2.7%, which is more than double the 1.3% increase in total U.S. employment during that same time period. Restaurants managed to add 116,000 positions during the first half of 2012, and overall, restaurants have added 575,000 jobs since employment recovery began in early 2010.

Currently, the restaurant industry makes up a workforce of nearly 13 million people, which is about 10% of the U.S. workforce.

“While restaurant industry job growth is not immune to the ups and downs of the economy, our industry has continually been at the forefront of job creation for the last two years,” said Dawn Sweeney, president and CEO of the National Restaurant Association. “Restaurant industry sales are gaining for the third consecutive year, spurring the nation’s nearly one million restaurants to staff up to meet the increasing demand for away-from-home meals. This illustrates the strength and resilience of our industry, as well as the wealth of opportunities it offers.”

The NRA estimates that restaurant industry sales will go above $632 billion this year, an increase over 2011 sales. Additionally, one out of three Americans say they are not dining out as often as they would like, which is down from two out of five about a year ago.

The NRA also projects that the industry will add 1.4 million positions in the next decade, and the fastest growing positions will include supervisors and food-and-beverage-serving workers.

The National Restaurant Association, founded in 1919, comprises 970,000 restaurant and foodservice outlets in the U.S., and is headquartered in the D.C.-area.