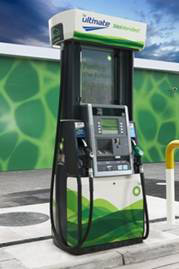 New Wayne Helix fuel dispensers are on display in London at the 2012 Olympic and Paralympic Games.

BP plans to showcase the new Wayne Helix fuel dispenser at the “Fueling the Future” showcase in London during the 2012 Olympic and Paralympic Games.

BP challenged Wayne, a global innovator of fuel dispensers, to design and build a fuel dispenser that could showcase BP’s future product aspirations from both a fueling and payment perspective. The station of the future will likely see increasing levels of bio-components blended into conventional fossil fuels such as petrol and diesel.

Wayne developed the Helix fuel dispenser based on extensive research and feedback from distributors, retailers, technicians and motorists from around the world.  Helix dispensers are built on a global platform for worldwide design recognition and a consistent, reliable fueling experience.

“Being selected by BP as the featured dispenser for the London 2012 biofuels showcase speaks to the commitment Wayne has made to elevate the standard for the modern fueling experience,” said Neil Thomas, Wayne global president. “We created this dispenser for an increasingly globalized world with significant input from our customers and from motorists worldwide.”

The new dispenser is designed to meet the standards of both ATEX and UL, global regulatory governing bodies for safety, and also delivers state-of-the-art payment security platforms that are certified to comply with both PCI and EMV standards. Additional features include enhanced displays with high-contrast design and increased branding and signage.

BP is the official oil and gas partner of the London 2012 Games, and will be providing advanced fuel for many of the fleet for more than 5,000 vehicles.  Both BP and Wayne have been partners for almost 30 years. Their relationship stretches back to include the Amoco and Arco brands prior to, during and after BP acquired those companies.