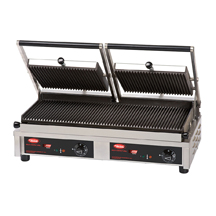 The multi contact grill recently introduced by Hatco comes with interchangeable plates, including grooved plates to cook
panini and flat plates for cooking a variety of other foods.

Choosing the best equipment can be the difference between a robust foodservice program and a bland one.

A piece of equipment doesn’t have to be brand new to be considered the most valuable player in a foodservice operation.

Take the Lincoln impinger ovens that Fremont, Ohio-based FriendShip Food Stores has been using since 2004. The Lincoln-brand ovens earned a reputation through the years for efficiency by creating a more effective workflow for delivering hot pizza to the customer.

Although the technology itself might not be new, Kevin Bible, FriendShip’s food service district manager, is always finding new ways to use it to expand the stores’ foodservice menu and streamline production of many items.

“We originally bought it to cook pizza, but quickly found that we can cook practically anything in the Impinger oven that you can cook in a convection oven,” Bible said. “Now we use the Lincoln to cook things like pepperoni rolls, subs, doughnuts and, most recently, cinnamon rolls.”

FriendShip has 14 of the countertop conveyor ovens, he calls “rock stars,” including two installed in one of the company stores.

Some are almost 10 years old and have required very little maintenance.

Bible said the cleaning process is also “c-store friendly,” requiring only about a half hour to pull apart, clean and reassemble. An online video walks staffers through the process.
Newer models of the Lincoln oven have higher cavity openings that allow a wider range of foods to fit inside, he said.The newer models also have four preset menu options that change the oven temperature and speed of the conveyor, which controls cooking time, with the touch of a button. (The older models have dials to control temperature and cooking time.)

No venting hood is required, so the ovens can be installed just about anywhere. To save on valuable countertop space, the new models can be stacked two high.

The Ovention technology allows different foods to be loaded on two trays, one on each side of the cooking box. One side, for example, could hold sausage patties for morning sandwiches, while, on the other side, biscuits could be loaded to wait for their turn in the oven. Once the sausage is cooked, that tray will slide out and the second tray will automatically load into the oven.

“Everything doesn’t have to cook at the same temperature,” Miller said. “The oven can go from 350 degrees to 400 degrees in no time.”

In addition to being an improved version of the impinger oven, Miller believes that the Ovention technology is a step beyond other rapid cook equipment, which uses a combination of convection and microwave during the cooking process.

NEW WAVE
Cooking without microwaves is important to stores that serve hot sandwiches because bread does not microwave well, he explained.

“Bread tends to lose elasticity when it is zapped with a microwave,” Miller said. “With the sandwich industry going the route of artisan breads, such as ciabatta and pretzel varieties, it is more important than ever to preserve the taste and texture of the breads.”

Miller noted that the Ovention technology is also very energy efficient and does not require a hood. The Matchbox also takes up the same amount of counter space as a regular impinger oven.

Another piece of equipment that Miller likes for convenience stores is a new Multi Contact Grill with interchangeable plates that was recently introduced by Hatco.

The grill comes with grooved plates to cook Panini and flat plates are available for cooking a wide variety of other foods including snacks, vegetables, meats, quesadillas, fish and hamburgers.

“It has a lot of applications for c-store foodservice,” Miller said.

GET THE DETAILS
No matter how advanced or efficient the equipment, retailers are wasting an opportunity to showcase a critical aspect of their foodservice program if the equipment is lined up in a military manner, or simply stored out of sight of consumers, said Mike Lawshe, president and CEO of Paragon Solutions, a retail design and consulting firm based in Fort Worth, Texas.

“At Ruth’s Chris Steak House, you hear and smell the steak sizzling before it is placed in front of you,” Lawshe said. “That’s part of the theater of foodservice, the sizzle sells the steak.”

Rotisserie chicken, he said, is one way to bring theater to the foodservice area. Customers can see the food being cooked and often notice the fresh food aroma.
One of his clients also has meat on a spit out front that is carved to order for gyro sandwiches.

“You see theater at Subway and Quiznos, too, when the sandwich builders walk along the case with the customers to make sure their sandwiches are made to their exact specifications,” Lawshe said.

The appearance of the case itself is also part of the retail store theater experience.

“You have to look at every detail of the case, down to the finish, hardware and even the sneeze guard to make sure they are as attractive as they can be,” Lawshe said. “Customers are looking through that to your product, and it’s the first thing they see.”

Lawshe reminded retailers to “look at your case through your customers’ eyes, not yours.”

4 Tips  for Beefing Up Foodservice Sales

• Think about how you can use existing equipment for different applications.
• Remember that theater sells.
• Make sure technology is staff-friendly.
• Keep up with consumer expectations.