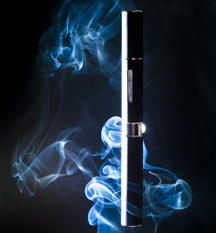 After a smoldering bag was removed from a JetBlue flight bound for Buffalo last week, it appears an e-cigarette could be to blame. The incident has caused airport officials to ask the Transportation Department to consider classifying e-cigarettes as hazardous materials, the New York Times reported.

It was not clear from the report if the combustion had reached the stage of fire, but the bag was sprayed with a hand-held extinguisher.

The incident has raises the question of whether e-cigarettes that use rechargeable lithium-ion batteries should be added to the list of items forbidden on airplanes, which already includes matches, flares and most batteries that are “spillable.”

Airport officials met with local Federal Aviation Administration (F.A.A.) inspectors to ask for an investigation, according to the New York Times. Meanwhile, an F.A.A. spokesperson told the paper that the list of banned items was controlled by the Transportation Department’s Pipeline and Hazardous Materials Safety Administration. A spokesman there said his agency was waiting for a formal determination of the cause.