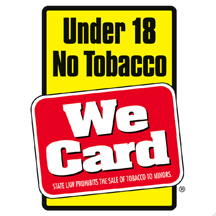 For every 18-year old, there has always been “We Card.” The iconic yellow and red logo “UNDER 18, NO TOBACCO: WE CARD” is everywhere at the nation’s tobacco-selling retailers and has been for 18 years running.

September is We Card Awareness Month and retailers will look to We Card to stay current on their responsible retailing efforts to identify and prevent not just tobacco, but e-cigarettes and other age-restricted product sales to minors.

In just a year’s time, the number of states restricting the sale of e-cigarette or vaping products to minors has nearly doubled. More than 40 states now require retailers to deny underage sales. Following behind the states is the FDA, which has proposed “deeming” e-cigarettes and other products it does not currently regulate as falling within its tobacco product regulations—eventually requiring retailers to “card” customers under 27 years old and deny underage sales.

“We’re ready to handle this new wave of retail requirements and deliver the employee training, the in-store tools, signage and awareness building efforts necessary so retailers can comply with the law,” said Doug Anderson, president of We Card.

Retailers might be a little ahead in their preparation for the recent wave of new and coming laws since We Card and one of its founding board members, the National Association of Convenience Stores (NACS), adopted a policy to encourage retailers to treat e- cigarettes as an age-restricted product even though every state and FDA have not done so yet.

“We Card is preparing retailers to responsibly sell tobacco, e-cigarettes and any new age- restricted product category which is ‘on mission’ since our launch 18 years ago. We Card is a staple of the industry, and a significant resource that retailers have used to dramatically reduce youth access to tobacco,” said Lyle Beckwith, senior vice president of government relations for NACS and a We Card board member.

September, We Card Awareness Month, launches an awareness effort that ties in with the availability of 2015 We Card materials. Labor Day to New Year’s Eve is We Card’s busiest time of the year as retailers order the coming year’s Age-of-Purchase Calendar—a daily reminder age-calculation tool—and a variety of other point-of-sale tools and signage to equip their stores

“We Card is an anchor resource for the food industry’s efforts to be responsible retailers of age-restricted products. This is a top priority for the retail food industry not only because it’s the right thing to do and the law requires it, but also because it’s important to our customers and the communities we serve.” said Leslie Sarasin, president and CEO of the Food Marketing Institute and founding board member of We Card.

We Card employee training is a primary offering, especially the award-winning elearning for frontline retail employees. We Card’s eLearning Center offers Internet-based training while some retail chains license the elearning and deploy it internally.

Government compliance statistics show the marked difference before “carding” and We Card became the operating norm in the retail community. According to the 2013 Synar Report measuring illegal tobacco sales to minors, successful attempts by minors to purchase tobacco products decreased from 40% in FFY 1997 to 9.6% in FFY 2013. FDA publicly available national enforcement data involving retail store inspections where minors attempt to purchase tobacco shows FFY 2013 with a 10.3% violation rate, as analyzed by the We Card Program.

FDA data for FFY 2014 through this July shows an 11% violation rate “which is all the more reason to train or re-train employees on the laws and requirements and provide them the skills set and confidence in identifying and denying illegal sales to minors,” said We Card’s Anderson.

“NGA has staunchly supported We Card since its inception because it serves as an important resource to ensuring retailers are abreast of the current laws on age-restricted products and properly trained to prevent minors from accessing such products. Independent grocers share a unique bond with the communities they serve, and keeping any age-restricted product out of the hands of minors is not only the right thing to do, but it’s good for the community, and it’s good for business,” said Peter Larkin, president and CEO of the National Grocers Association and founding board member of We Card.

FDA has completed more than 324,000 retailer compliance checks since 2010—at a rate of approximately 100,000 for the past three years. FDA has issued official guidance for Tobacco Retailer Training Programs and We Card’s elearning training not only matches this federal curriculum but exceeds it with retail-focused emphasis on customer service, role-playing and interactive gaming—earning the training an American Business Awards 2013 Bronze Stevie Award as a Best Training Site.