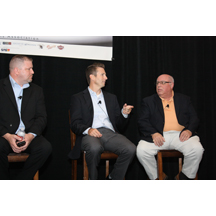 Attendees at the 2014 National Advisory Group (NAG) Conference, hosted by Convenience Store Decisions, perked up this week when the topics turned to coffee and foodservice.

Joseph Chiovera, president of XS Foodservice & Marketing, moderated the coffee panel discussion. He reminded those in the audience that while is a staple of the industry, one particular fast food competitor rolled out a successful coffee program that forced most c-stores to rethink their approach to the category.

“A few years ago, we got kicked in the teeth by McDonalds and we haven’t come back from that,” Chiovera said.

Instead, the industry is adapting to customers’ tastes, which continue to evolve.

Today, “it’s all about customization and personalization,” Chiovera said.

In the last few years, coffee service has grown more customized and personal at Rutter’s Farm Stores, where Jerry Weiner is vice president of foodservice.

“Regular and decaf aren’t enough anymore,” Weiner said. “Variety is what appeals to the masses.”

Rutter’s has expanded its hot beverage selections to include more types of coffees, teas, espresso, frappes, and lattes. Also, taste enhancers such as creamers, syrups, toppings, and whipped cream has sweetened Rutter’s plan to add more value to its coffee category.

Acknowledging that the coffee sold by Maverik Inc. just a few years ago just didn’t taste good, Aaron Simpson, vice president of merchandising and marketing, told NAG members during the discussion that in examining its coffee, Maverik began with the grounds and worked up from there.

“For us, that was job one, getting the coffee right,” Simpson said.

After finding the right blend, the company has successfully branded its different coffee, prompting a strong customer following and increased sales.

Cumberland Farms saw coffee sales in its 544 stores increased 15% last year, and expects a similar spike this year. Greg Lorance, dispensed beverages category manager for Cumberland Farms, took over the category in 2008. At the time, he felt the company’s coffee was weak—as in an uninspired product and lacking an identity. Lorance then led the charge with the concept that eventually changed the view of coffee as a single item in the revenue mix to a total store traffic driver would make Cumberland Farms a coffee destination.

“This was a decision from the top down and adopted by the entire company,” Lorance said.

Following heavy promotions and a lot of effort, the category is a primary sales driver now.

While coffee is drawing customers, quality foodservice is helping c-store margins across the board. According to researchers there’s a clear opportunity to grow patron visits and compete more effectively against grocery stores and quick-serve restaurants (QSR).

Study Hall Research, a quantitative research firm based in Tampa, Fla. that specializes in foodservice areas, polled more than 1,000 consumers of prepared food. According to the Study Hall survey presented to NAG, more than 64% of respondents purchased their snacks from a c-store, outshining both grocery stores and QSR by a wide margin.

“The prepared food buyer has turned the model on its head because they eat what they want, when they want,” said Rob Iles partner and managing director of Study Hall.

Opportunity for the c-stores to capture more prepared food consumers exists during breakfast, where c-stores are preforming strongly compared to the competition.

Some tips that Study Hall’s Ilse had for c-stores to bolster their foodservice programs included: