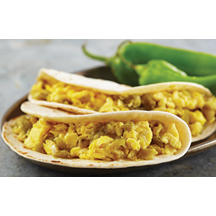 Handheld, ethnic breakfast offerings, such as tacos, tortillas, empanadas and kolaches, are hot stuff everywhere from quick-service restaurants to convenience stores around the country. Retailers explain how they are spicing up their breakfast sales with these ethnic edibles.

Mexican in the morning is now mainstream, said Aaron Noveshen, founder and president of the Culinary Edge, a San Francisco-based restaurant and foodservice consulting firm. With the addition in July of five new breakfast burritos to its menu, Taco Bell doubled the number of burrito and taco offerings available in the morning to 10 a.m., will add two more in the middle of October, plus it’s testing a biscuit taco.

Meanwhile, McDonald’s is reported to be testing a chorizo burrito in some markets.

“These traditionally Mexican items are on so many menus and are so popular across the country that many people now view them as American foods,” Noveshen said.

Part of their popularity stems from their portability, he noted. In a recent survey published by Chicago-based Technomic research firm, 43% of consumers said they would like to see convenience stores offer more handheld foods for the morning daypart, including breakfast tacos and burritos.

ETHNIC TO GO
Customers like the ethnic experience. Twenty-seven percent of survey respondents said they wished convenience stores would offer more Mexican-inspired foods and flavors at breakfast. What’s more, 29% said they would consider ordering a Mexican-style breakfast sandwich at a c-store.

At San Antonio-based CST Brand’s Corner Stores, tortillas are rolled out and pressed on-site to create a line of five different breakfast tacos. With 600 locations in Texas and more than 1,000 sites throughout the Southwest, Corner Stores meets with plenty of competition in the Mexican food arena, said Richard Poye, the chain’s director of foodservice.

“It’s pretty intense,” Poye said. “A lot of people in our markets grew up eating fresh tortillas and that’s what they expect.”
The majority of the breakfast tacos at Corner Stores are sold from a grab-and-go hot hold cabinet right next to the kitchen. A bar offers numerous customization options, including red and green salsas, sliced jalapeños, hot sauces and other toppings.
“Some people are content with a little salsa in a dipping cup, while others like to load up on the toppings,” he explained.

Tacos are available in more than 75 Corner Store locations. New stores will also feature the program.

The fifth taco is a limited time offer (LTO) creation.

“We like to always have something new in the lineup to keep things exciting and to satisfy the curious shopper,” Poye said. “We see a real surge in interest when we introduce a new LTO.”

One recent LTO that really caught on with customers features Hatch chile (a pepper grown in New Mexico’s Hatch Valley) and egg.

Corner Stores introduced breakfast tacos about seven years ago. Today they account for “a significant part” of the breakfast business in stores that have the program, Poye noted.

Austin, Texas-based Kwik Chek Food Stores has been serving up breakfast tacos for the past three years. The selection makes up about 30% of the breakfast sales in the five stores that feature the program.

Until recently, Kwik Chek’s program was grab and go. Tacos were assembled on site and held in hot boxes for no more than one hour, said John Longden, the company’s director of foodservice operations. Currently, Kwik Chek is rolling out a new made-to-order (MTO) program for its breakfast tacos.

The program was scheduled to launch sometime around the end of September. The company expects to offer the made-to-order tacos in 25 of its stores by the end of October.

“Customers are looking for fresher foods and part of that is seeing their food being made to order in front of them,” Longden said. “They also want to customize their food.”

The stores will continue to offer four varieties—bacon, egg and cheese; sausage, egg and cheese; chorizo; and egg, potato and cheese. Longden said that the company is adding more topping options, such as sautéed green and red peppers and onion. Once the program is up and running, Kwik Chek will add to its breakfast taco menu with seasonal LTOs.

Customers in a hurry need not be concerned that getting their breakfast taco made to order will eat into their busy schedules. “We can have it ready to go in 20 seconds,” Longden explained. “That speed, as well as the theater of MTO and the freshness of the product, will give us a real competitive edge in our markets.”

For customers who prefer the convenience of grab and go, the hot box will also be kept filled with freshly made breakfast tacos.
Pricing is also a factor that makes tacos an attractive breakfast option, Noveshen said. At Corner Stores, the breakfast tacos are priced at $1.69, at Kwik Chek, they are $1.49. Customers often buy at least two at a time, Poye said.

Another Mexican favorite, the empanada, is featured in mini form on the breakfast menu at participating 7-Eleven hot food stores. The small, crescent-shaped pastries, called Breakfast Empanada Bites are filled with eggs, cheese, bacon, ham and sausage. The bites are priced at three for $1.

EXPANDING OFFERINGS
Mexican fare isn’t the only ethnic offering that makes a quick, convenient breakfast. A traditional Czech specialty known as a kolache is the signature item and top morning seller at Corner Stores.

A kolache is a sandwich that features fluffy, slightly sweet dough wrapped around meat, cheese and other fillings. Poye said since the stores introduced them more than four years ago, they have found a loyal and enthusiastic following both in Texas, where they are regarded as a staple comfort food, as well as other markets the c-store operates.

As with the tacos, Corner Store faces a great deal of competition for kolache sales in many of its core markets, so the stores bake them on site in front of the customers to set themselves apart. That freshness is a big part of what makes Corner Store’s kolaches a destination food, Poye said.

Kolaches, which are available in close to 400 of the company’s stores, are priced at $1.69. They are also available in a bundle of two plus a cup of the stores’ Cibolo Mountain coffee or a 32-ounce fountain drink for $4. (Breakfast tacos can be substituted for the kolaches in this bundle deal.)

In May, Dallas-based 7-Eleven added kolaches to the breakfast menus at approximately 450 participating hot foods stores in Texas.

The sandwiches, filled with pork and beef sausage or beef sausage with jalapeño and cheddar, are priced at $1.69 each or two for $3.

Like the tacos, kolaches are often purchased in multiple numbers.

“It’s not at all unusual to see someone purchasing a whole box of them to bring to the office or to share with friends or family,” Poye said.