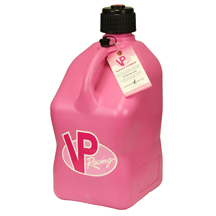 VP Racing Fuels announced it is marking Breast Cancer Awareness Month by doubling the amount of money it donates with each sale of its pink VP Motorsport Container.

The pink containers were created to support Breast Cancer Awareness when introduced in late 2012. Since then, a portion of the proceeds from each sale throughout the year has been donated to the Prevent Cancer Foundation, but during each October the amount of the donation is doubled.

“Our pink Motorsport Container has resonated with many people inside and outside the racing community,” said Alan Cerwick, president of VP Racing Fuels. “So many people are touched by this disease, including those in the extended VP Racing Fuels family. To do our part, we’re committed to raising money for the Prevent Cancer Foundation in support of its cancer prevention research, education and community outreach programs.”

VP’s pink Motorsport Containers can be ordered online at VPRacingFuels.com, or by contacting the appropriate regional VP distribution center to locate the nearest VP dealer.

VP Motorsport Containers are made with only the highest quality virgin high-density polyethylene, including 30% more material than standard containers to withstand the roughest treatment. The containers are subjected to a 15-point quality test and carry a three-year limited warranty. They feature an ergonomically contoured handle, bottom grip for easy pouring and a nonbreakable multipurpose cap with rubber gaskets.