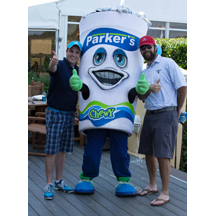 Chewy, the official Parker’s mascot, made a special appearance at the Parker’s Fueling the Community Charity Golf Tournament, held in Savannah on Oct. 28.

The 2014 Parker’s Fueling the Community Charity Golf Tournament, held on Oct. 28 at The Club at Savannah Harbor in Savannah, Ga., raised $70,708 to benefit area schools.

The tournament attracted 144 players from across the region, including a number of Parker’s vendors, suppliers and supporters. Proceeds will benefit Georgia and South Carolina schools in areas where Parker’s operates convenience stores.

The winning team at the second annual golf tournament was Team Monster, which included Jeff Chadwick, Jeff Blacker, Billy Weyer and Roger Ghee. The scramble-format event also featured lunch, a raffle and a Longest Drive, Closest to the Hole and Putting Contest.

Parker’s donates one cent on the profit of every gallon of gas purchased at all of its convenience stores on the first Wednesday of the month to area schools through the Fueling the Community program. The company’s charitable initiative officially launched in the fall of 2011 and donates money to public and private schools throughout Georgia and South Carolina.

“Our Fueling the Community program has been a tremendous success,” said Parker, “but this additional support will enable us to make even more generous donations to public and private schools in the future.”