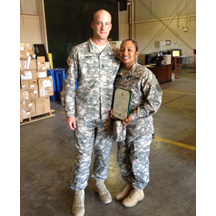 U.S. military veterans have the chance to win their own store.

The winner will receive a waiver of the franchise fee, valued at up to $190,000, to franchise any of the company’s 7‑Eleven convenience stores available in the continental U.S. at the contest’s culmination. Interested veterans who are first-time 7‑Eleven franchise applicants, can enter online at www.VeteransFranchiseGiveaway.com through Jan. 25, 2015. The winner will be announced in April 2015.

The Operation: Take Command franchise giveaway is a multi-phased competition that includes meeting 7‑Eleven’s franchising qualifications, interviews, a Facebook video contest by 10 preliminary finalists and an interview with 7‑Eleven President and CEO Joe DePinto for the three finalists. The competition is for first-time prospective franchisees, those veterans who do not already franchise a 7‑Eleven store.

“I can think of no one more deserving of this extraordinary opportunity to win a 7‑Eleven franchise than one of our military veterans who has given so much for our country,” said DePinto, a graduate of the Military Academy at West Point and former U.S. Army officer.

“7‑Eleven is a winner, too, because veterans bring top-notch leadership skills, a can-do attitude and mission-oriented focus to their business. Our experience has shown that U.S. veterans have the desire, ambition and core values needed to be successful 7‑Eleven franchisees.”

Nov. 11-Jan. 25, 2015 – U.S. veterans from all branches of the armed services can apply online at www.VeteransFranchiseGiveaway.com

March 2015 – Preliminary finalists notified and asked to produce a two-minute video showing why they should win the free 7‑Eleven franchise.

Awards Ceremony and Grand Opening Celebration – To be announced

To qualify for Operation Take Command, an entrant must be age 21 or older, a U.S. citizen or permanent resident, an honorably discharged veteran, have excellent credit and at least three years of leadership, retail or restaurant experience.

Operation: Take Command 7‑Eleven is advertising its franchise giveaway contest in military, veterans and business publications, promoting on social media (Facebook, LinkedIn, Twitter and YouTube) and its Websites and at military job fairs around the country.

“All eligible veterans have a winning business proposition with 7‑Eleven’s pro-military franchise program,” said Greg Franks, 7‑Eleven vice president of Franchising Systems. “7‑Eleven already offers qualified veterans a discount of up to a 20 percent on the franchise fee for their first 7‑Eleven store, a value of up to $50,000, along with preferred interest rates and special financing on up to 65 percent of the 7‑Eleven franchise fee.”

“We were coming to the end of our military careers and knew we wanted to own our own business,” Green said. “We were smart enough to know that we didn’t have the experience to go out on our own. Theresa and I did our research on ‘good franchises for veterans,’ and 7‑Eleven kept popping up. We liked their business model, and the support provided by the company has been great.”

The Greens, who received the 20%- military discount on their franchise fee, opened their first 7‑Eleven store this summer in Temple, Texas, near Fort Hood where they had been stationed. The couple is looking to grow with the company. Green’s advice to new veteran franchisees, “Work hard, follow the 7‑Eleven business model, and you’re good to go.”

The company was selected a 2014-2015 “Best for Vets” franchise by Military Times, a Top 100 Military-Friendly Employer by G.I. Jobs, one of U.S. Veterans Magazine Top 100 Veteran-Friendly Companies and MVE (Most Valuable Employer) by civilianjobs.com.

According to the U.S. Bureau of Labor Statistics, military personnel who served on active duty anytime since September 2001 can face greater employment challenges than civilians and older veterans. Veteran entrepreneurship offers an opportunity to start a successful business in which retired and honorably discharged service personnel can use their skills to control their financial destiny. 7‑Eleven also offers careers in a variety of fields to qualified veterans.