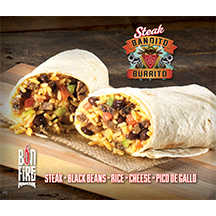 In the not-so-distant past, consumers had to go to ethnic restaurants to get the bold and authentic flavors they craved. Now all they have to do is visit their nearest convenience store.

The National Restaurant Association’s “What’s Hot” culinary forecast listed ethnic condiments and spices as the 11th hottest food trend to watch for 2016. And authentic ethnic cuisines follow at No. 12.

Tim Powell, vice president of consulting at Q1 Productions, a Chicago-based business intelligence firm, explained that America’s love of ethnic food is more than just a passing fancy. He pointed to the plethora of restaurants from mom and pop eateries to full-service chains that feature ethnic cuisine. And the fast-casual Chipotle has been popular for upwards of 15 years.

“The difference now is that consumers are looking for authentic flavors in a more portable form,” Powell said. “And that means sandwiches that have an authentic story behind them.”

Today’s consumers, particularly Millennials, are more educated as to what is authentic to a cuisine because they travel more frequently and are exposed to different cuisines through social media and outlets such as the Food Channel and the Food Network. The nation’s increasingly ethnically-diverse population also adds many native flavors to the mix.

FLAVORS DRIVE INTEREST
Each month a new sandwich with distinctive ingredients and flavors is featured at Waltham, Mass.-based Alltown Market stores. For April, for example, the c-stores featured a Mediterranean wrap with Middle Eastern flavors such as an in-house-made hummus- and tahini-based sauce, feta cheese, black olives and red onions. Customers could choose to go meatless or add chicken to the sandwich.

Sandwiches that do particularly well during their monthly run can earn a place on the stores’ permanent menu, said Joy Almekies, the company’s director of foodservice. One such sandwich was November’s Ragin’ Cajun with black pepper turkey, hot ham, spicy pepper jack cheese and a proprietary chipotle sauce.

“Spicy sandwiches are generally well received in our stores,” said Almekies, a Johnson & Wales University culinary school graduate and self-described “foodie.” “We like to constantly offer something new and exciting that our customers can’t get anywhere else.”

On its menu of eight signature sandwiches, the Angry Bleu, fried buffalo chicken with house-made hot sauce and ranch dressing, “sells like crazy.”

Among the favorites at York, Pa.-based Rutter’s Farm Stores are the sandwiches made with shaved steak. Ryan Krebs, Rutter’s director of food services, uses shaved steak from Home Market Foods in a regionally-inspired Philly-style cheesesteak, Mexican-style breakfast burrito and quesadilla, and an open-face sandwich topped with gravy, sautéed peppers and onions.

This summer, three more Hotties will be introduced for a total of five. They are the “Grilladelphia” with steak, peppers and onions; a Denver omelet and a Chicken Cordon Blue with ham, cheese and a honey-mustard schmear.

Not a Hottie, but still very popular at Maverik is the Kung Fu Wrap. It is made with chicken, a spicy peanut sauce, Asian slaw, Napa cabbage, cilantro, green onions, daikon radish, carrots and lettuce.
By making its existing wraps larger, bolstering the fillings, punching up the flavors and upscaling the packaging, Maverik has more than tripled the sales of these sandwiches despite a price rise.

“A lot of customers, especially Millennials, are looking for bolder flavors,” Lore said. “To get their attention, it has to be really dramatic and impactful.”

Over the past winter, La Crosse, Wis.-based Kwik Trip convenience stores tested a pulled pork sandwich. The test did so well that the product is being rolled out to all 485 of the chain’s locations, announced Paul Servais, Kwik Trip’s food service zone leader.

The company is also testing brioche bread and a spicy buffalo chicken sandwich. It is also introducing a jazzed up chicken salad with cranberries on multigrain bread with rolled oats.

CONDIMENTS ADD SPICE
Customers at Rutter’s can choose from more than 45 toppings to create their own flavor profiles for their sandwiches. Among the selections are dry seasonings and sauces and dressings such as the proprietary Bada Bing sauce and kimchi aioli.

“We were extremely encouraged by how much our customers like the kimchi aioli because it’s so different, with a smoky, almost bacon taste,” Krebs said.

Krebs is also looking at adding tzatziki (cucumber and yogurt), wasabi and chipotle sauces as well as some cream cheese-based spreads.

“Depending on the size of the store, we will be adding between 12-18 new facings of sauces, many of which will be hot sauces and others that will be ethnic in origin such as Asian and Latin,” Lore said.

Many of the new sauces and other condiments are being developed by Maverik’s in-house research and development department. Among them are an extra-spicy hot sauce, pico de gallo with fresh tomatoes, a jalapeño sauce that has a mayonnaise and sour cream base, Lore noted. Sesame and wasabi sauces as well as a New Mexico-style fire-roasted Hatch green chili are also in the works.

“Many times our limited time offers also have sriracha,” Servais said. “And they do very well.”