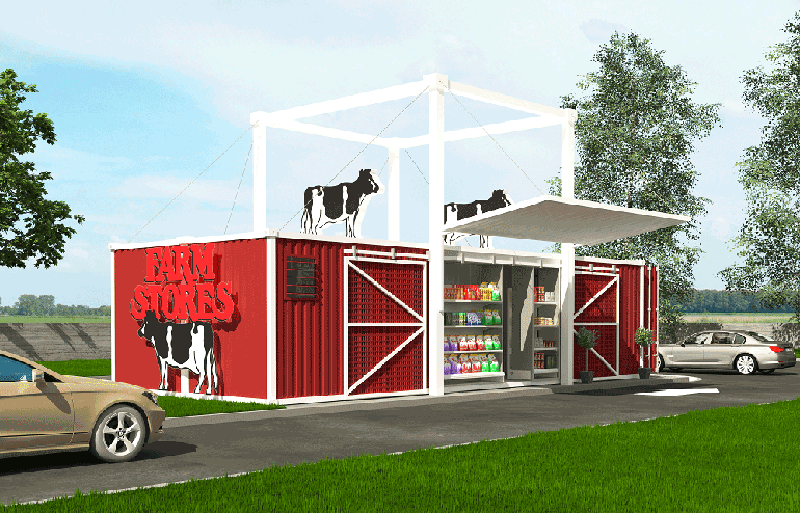 Farm Stores is expanding into Scott, La., in May with a 640-square-foot drive-thru c-store made from repurposed shipping containers, according to CNN.

Florida-based Farm Stores opened in Miami in 1957 with a 350-square-foot drive-thru that sold fresh food and dairy products.

“In the 1950s, Americans were already going to drive-in theatres and drive-in diners. The idea emerged to replicate this model in convenience stores,” Maurice Bared, Farm Stores owner and CEO, told CNN.

Farm Stores now has 65 locations in Florida. The company became a franchise in 2015 and has a plan for expanding Farm Stores nationwide.

The Louisiana store will be the first to debut the shipping container model, which Bared said is about 40% cheaper than building a store from the ground up.

“I had this vision of a Farm Store in a container for two reasons,” Bared told CNN. “First, the shoebox layout of a container is the same exact size as our stores. I also grew up in the construction industry with my father having his own business. It’s where I saw the foremen had converted shipping containers into their offices.”

The store is made with two containers, welded into place on a concrete foundation. It features tiled floors, sliding glass doors and a canopy over the roof. The inside includes a baking station and employee bathroom.

The company plans to build all new stores in repurposed shipping containers, and over the next seven years, they aim to have as many as 600 new Farm Stores under development. More than half of those are already underway in New York, New Jersey and Connecticut.