Hoshizaki America Inc. has transferred manufacturing of the IM-500SAB stackable and the IM-200BAC self-contained square cube ice machines from Europe to their facility in Peachtree City, Ga.

“The demand for specialty ice shapes is just starting to take off in the Americas, but already exists in Europe,” said Hoshizaki’s Director of New Product Development Jon O’Hern. “It’s a trend we’ve seen growing and with this move Hoshizaki America becomes the premier manufacturer of specialty ice machines in the western hemisphere.”

In early 2014, Hoshizaki introduced the IM-500BAA to the US market, which remains largely unchanged. The 44-inch wide air-cooled unit produces up to 489 pounds. of individual 1” square ice cubes daily. 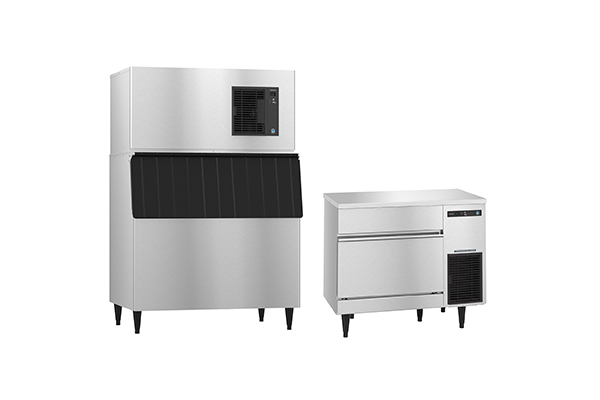 The stackable head design allows operators to scale their operation by adding up to two more head units to produce 1,460 pounds of ice within the same footprint. This is a popular unit for medium to large operations where it would be installed in the back of the house and ice shuttled to the bar(s) and serving areas.

Due to the popularity and demand for large square cubes, Hoshizaki developed a smaller undercounter square cuber with a space saving self-contained bin. The IM-200BAA, and newest IM-200BAC produces 188 pounds of square cubes daily and holds 75 pounds in the built-in bin.

Both icemaker exteriors are constructed of stainless steel making them durable and easy to clean. Hoshizaki America also warranties the entire machine parts and labor for three years and the compressor for five years.

With corporate headquarters in Peachtree City, Ga., and a second manufacturing facility in Griffin, Ga., Hoshizaki America Inc. employs more than 700 people nationwide. Hoshizaki has been awarded the Energy Star Partner of the Year – Sustained Excellence award multiple years in a row for their continued leadership in protecting the environment through superior energy efficiency achievements.