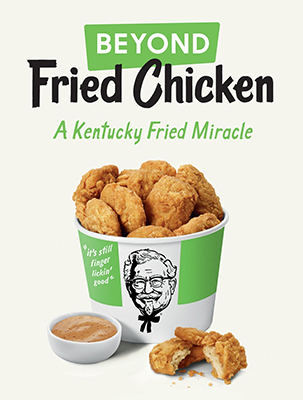 KFC is testing plant-based ‘Beyond Fried Chicken,’ made from Beyond Meat, in one restaurant in Atlanta.

Founded in 2009, Beyond Meat uses plant-based ingredients to replicate the taste, texture and other sensory attributes of popular animal-based meat products. Its products, including burgers, ground beef and sausage alternatives, are sold at more than 53,000 retail and foodservice outlets worldwide.

“KFC is an iconic part of American culture and a brand that I, like so many consumers, grew up with. To be able to bring Beyond Fried Chicken, in all of its KFC-inspired deliciousness to market, speaks to our collective ability to meet the consumer where they are and accompany them on their journey. My only regret is not being able to see the legendary Colonel himself enjoy this important moment,” said Ethan Brown, founder and CEO, Beyond Meat.

KFC joins a growing list of fast-food and quick-serve restaurants that are adding plant-based meat to their menus.

Burger King recently made its plant-based Impossible Whopper available nationwide. Tim Hortons is offering Beyond Meat breakfast sandwiches. Dunkin’ is testing Beyond Meat sausage and egg sandwiches in New York, and announced in July that it plans to bring plant-based sandwiches to every U.S. store in the near future.

KFC will offer Beyond Fried Chicken as nuggets or boneless wings, each available in six or 12-piece combo meals. The wings cost $6 for a half-dozen and $12 for a dozen, and the nuggets are $6.49 for six and $8.49 for 12. Customers can also buy four plant-based chicken nuggets a la carte for $1.99.