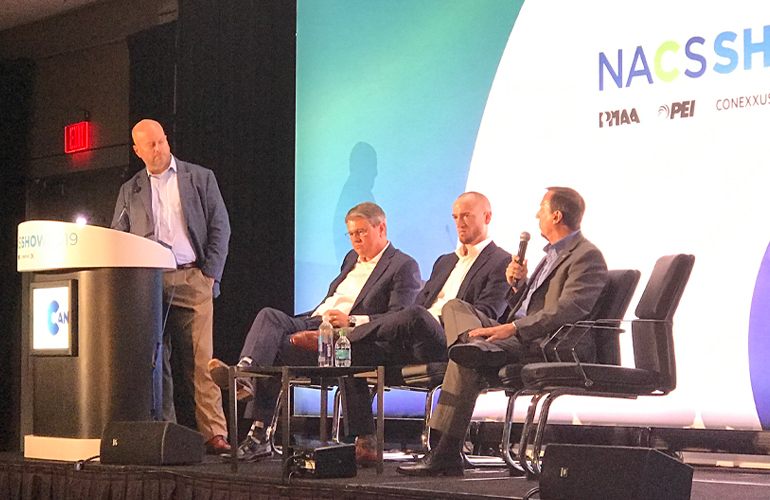 The “Successfully Retailing Biofuels” panel at the NACS Show in Atlanta.

The educational sessions got underway on the first day of the National Association of Convenience Stores Show at Atlanta’s Georgia World Congress Center on Tuesday, Oct. 1.

“Successfully Retailing Biofuels” sorted through the misconceptions and logistics of selling biofuels alongside non-renewable fuels.

Doug Berven, vice president for corporate affairs for Poet Ethanol Products, made a strong case for growing the use of ethanol in America’s vehicles. Berven said that ethanol is good for the United States because it’s good for national security, good for the economy and good for the environment.

“We’re not energy independent in this country,” he said, “because we’re not competitive with oils from the rest of the world.”

Biofuels and ethanol can help solve that problem. Berven said that ethanol is a superior fuel, especially with newer smaller, optimized engines.

Casey’s General Stores has made a highly visible commitment to biofuels, as evidenced by the company’s efforts to make E15 available at 500 of its locations. Casey’s Fuel Pricing Manager Jake Comer told the attending retailers that there are fewer hurdles than ever standing in the way of offering E15.

“If you have the expertise and you do the research, you can ramp up quickly,” said Comer. In fact, Casey’s itself only began retailing ethanol as recently as 2017.

Jeff Dzierzanowski, new business development manager for Source North America Corp., used a diagram of an underground fuel storage system template to explain everything from the PV vent through to the storage tank to the piping through the nozzle.

Dzierzanowski said that a new build facility is an easier and quicker way for bringing biofuels to market. A retrofit of an existing site is a bigger challenge. He stressed that upgrading an existing site requires “a comprehensive and thorough site survey should be performed by a qualified contractor, technician or distributor.”

All components should be documented, identified and photographed for later reference during the rebuild process. But the trouble may be worth it. Retailing E15 – now being branded Unleaded 88 – in a separate, dedicated hose averages between 3% and 12% of station sales. But dispense it through a shared hose as Unleaded 88 and E15 ethanol’s share can jump to just more than half of sales.

Why? According to Berven, it’s simple dollars and sense. “E15 has got a great track record,” he said. “Those people who are using it are getting great performance, great savings.”

The panel discussing “How to Measure Promotion Effectiveness and ROI” tackled the complexities of using promos to increase basket spend and margin while also evading the pitfalls of items on special – like merely substituting one soft drink brand for another on special that cancel each other out.

“Look for affinities,” said John Spicknall, director of general merchandise, snacks and candy at RaceTrac’s 550 stores in six states. “Soda is on special – but it also helps take-home chips move, too.” Combinations like that increase your sales and raise your bottom line.

The “Taking Your Customer Loyalty Strategy Mobile” panel stressed knowing your customers and their consumer behavior as much as you can in order to personalize mobile and in-store interactions with them.