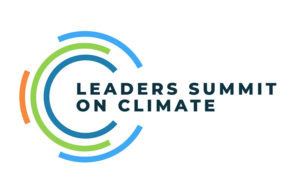 Today, at the Leaders Summit on Climate, President Biden is announcing a new target for the U.S. to achieve a 50-52% reduction from 2005 levels in economy-wide net greenhouse gas pollution in 2030.

All 40 world leaders that President Biden invited to the virtual summit are attending. The U.K. and European Union (EU) have committed to reducing emissions by 68% and 55%, respectively, by 2030. China, the world’s biggest emitter, has committed to reach peak emissions by 2030 and be carbon neutral by 2060.

As part of re-entering the Paris Agreement, the president launched a whole-of-government process, organized through his National Climate Task Force, to establish this new 2030 emissions target — known as the “nationally determined contribution” (NDC), a formal submission to the United Nations Framework Convention on Climate Change (UNFCCC). Today’s announcement is the product of this government-wide assessment of how to make the most of the opportunity combatting climate change presents.

“The United States is not waiting, the costs of delay are too great, and our nation is resolved to act now,” said an official release from The White House. “Climate change poses an existential threat, but responding to this threat offers an opportunity to support good-paying, union jobs, strengthen America’s working communities, protect public health and advance environmental justice. Creating jobs and tackling climate change go hand in hand — empowering the U.S. to build more resilient infrastructure, expand access to clean air and drinking water, spur American technological innovations, and create good-paying, union jobs along the way.”

To develop the goal, the Administration analyzed how every sector of the economy can spur innovation, unleash new opportunities, drive competitiveness and cut pollution. The target builds on leadership from mayors, county executives, governors, tribal leaders, businesses, faith groups, cultural institutions, health care organizations, investor and communities who have worked together to ensure sustained progress in reducing pollution in the U.S.

Building on and benefiting from that foundation, the 2030 target picks up the pace of emissions reductions in the U.S., compared to historical levels, while supporting President Biden’s existing goals to create a carbon pollution-free power sector by 2035 and net zero emissions economy by no later than 2050.

The full release is available here.