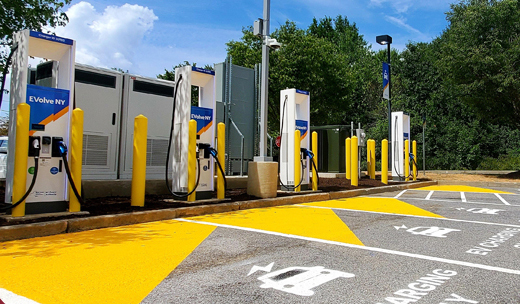 Saratoga Springs, N.Y.-based Stewart’s Shops will introduce electric vehicle chargers (EVCs) to five of its locations, having begun installation of its first store’s units, expected to be in service by the fall.

Stewart’s Shops broke ground on its first NYPA EVolve Electric Vehicle Fast Charging Station on July 1 in Schodack, N.Y. The chargers are powerful enough to provide a full charge to an electric vehicle in just 15 to 30 minutes.

The DC (Direct Current) fast chargers have three types of plugs to fit ports on various models of electric vehicles.

EVolve New York’s chargers are available to all non-Tesla electric vehicles. Some charging stations will also have a Tesla Adapter. Stewart’s Shops currently has three Tesla supercharging stations throughout New York with plans to expand the program by installing two more by the end of 2021.

The EVCs are expected to bring customers inside during charging to not only shop the store, but also have enough time to enjoy a hot or cold food item before departing with a fully charged battery.

The new charging stations are not the only steps Stewart’s Shops is taking to become more sustainable. Stewart’s Shops uses solar energy at offsite location in Halfmoon and Castle Creek, N.Y., and its manufacturing plant has 2,400 individual solar panels on the rooftop that offset 75% of the power at 50 locations.

Store customers can get a discount on their coffee when they use their reusable mugs and Stewart’s also offers reusable bags at all of its locations. All shops are equipped with LED lighting and offer plant-based straws, as well.