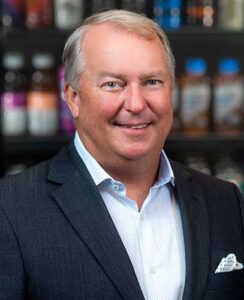 Immediately prior to joining CPG, Summers served as senior vice president of franchise operations for Dallas-based 7-Eleven Inc. In that role, he was responsible for the growth and profitability of more than 6,800 franchise stores. Previously, he was vice president of operations for 7-Eleven’s highest volume zone located in the Southeast U.S., where he oversaw 1,300 franchise stores and approved new store development and site selection.

“I want to welcome Jim to our company,” said CEO Binod Chaudhary, who co-founded CPG with company Chairman Dilara Chaudhary. “As a 7-Eleven franchisee, we worked very closely with him over the past seven years and came to respect his talent and business acumen. He will be able to hit the ground running and help us put the right pieces in place to accommodate the considerable growth we foresee taking place in the coming years.”

“I am delighted to now be part of CPG and utilizing my leadership skills to help the company achieve its growth goals,” Summers said. “As long-time 7-Eleven franchisees, Binod and Dilara have proven themselves to be innovative thinkers who are focused on modernizing and improving the convenience store experience. It will now be a pleasure to work alongside them and see what we can accomplish together while working on the same team.”

Summers started at 7-Eleven in 1990 operating individual stores, but was quickly promoted to field consultant, market manager and fresh foods category manager. He and his team were involved in the development of food products that were manufactured and delivered through the 7-Eleven proprietary commissary and logistics systems for 5,800 stores.

Summers’ career at 7-Eleven spanned a total of 22 years. After the first 12 years, he accepted an opportunity to become cirector of tool rental for Home Depot. After that experience, he was tapped to lead a start-up convenience store business, Mid-Atlantic Convenience Stores, which became one of the largest marketers for ExxonMobil in North America. As president and chief operating officer, he was responsible for all company operations. After helping the company get established, he returned to 7-Eleven to accept the vice president of operations role which he held for just over nine years.

At CPG, Summers is responsible for establishing standard operating procedures and systems to improve the existing business and enable future growth.

In addition to owning and operating a portfolio of four 7-Eleven stores and gas stations in South Florida, CPG is also a fuel wholesaler for ExxonMobil in the region. The company is partnered with 7-Eleven corporate to develop and operate new concept stores with trendy designs that meet consumers’ everyday needs for supplies and freshly made food. CPG identifies underperforming convenience stores that it can acquire, tear down and rebuild to modern specifications.

CPG has also developed a new quick-service restaurant (QSR) brand, Fusion Fresh, that will be incorporated into the stores. The concept boasts a menu of healthy food options freshly prepared in just minutes and delivered to consumers in person, curbside or by delivery.

Chaudhary Petroleum Group (CPG) has owned and operated convenience stores in South Florida since 2006. The company currently owns and operates a portfolio of 7-Eleven stores throughout Florida’s Palm Beach and Broward Counties and a team to support day-to-day operations. In addition, CPG is a distributor for ExxonMobil gasoline throughout the tri-county area. CPG is partnered with 7-Eleven to develop new concept stores conveniently located in growing areas where consumers can pick up supplies and freshly made food for dine-in or takeout.