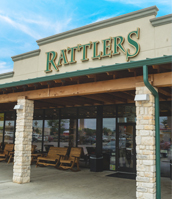 The Texas chain is upping its game online while perfecting its own grab-and-go concept.

With 11 locations in Texas, Rattlers Convenience Stores, is set to renovate one of its earliest stores located near its company headquarters in Navasota, Texas, doubling the location’s size. It’s just one sign the growing chain is meeting the competition head on.

Rattlers is also constructing its newest store, while keeping a lookout for acquisition opportunities. Whether improving on the old or planning for the future, that one constant is the chain’s dedication to the brand and its customers.

The company’s plans for controlled organic growth, attention to detail, commitment to developing foodservice, investment in technology, and outreach in the community make Rattlers a 2014 Chain to Watch.

New Initiatives
After years of testing a variety of co-branded foodservice programs, Rattlers is currently perfecting a grab-and-go concept at its newest location in Giddings, Texas. The store not only features a made-fresh sandwich program, but also offers a fudge shop, and an array of salads, parfaits, puddings and other grab-and-go favorites, such as deviled eggs. The sandwiches are made in-store and displayed in an open-air merchandising cooler.

“The big component of this program was that it had to be easy for the consumer to grab and go. Currently, we’re refining this at our Giddings, Texas location, and then we’ll start taking the concept to our other locations that have the capability for this kind of sandwich making program,” said Jim Kolkhorst, CEO of Rattlers.

In addition to the grab-and-go concept, Rattlers has five Burger King franchises, two standalone and three attached to Rattlers convenience stores.
Rattlers is also expanding its reach via its Rattlers Rewards loyalty program and technological initiatives. This year, the chain partnered with OpenStore by Gas Buddy to launch a new Website and app, and has begun to aggressively promote via social media—including a revamp of its Twitter and Facebook pages—to reach a wider audience.

“With consumers today—particularly the younger demographic—you have to find a method to communicate with them as to what you’re doing,” Kolkhorst said.

“The app has all of our locations listed, including what we’re selling fuel for at each location, and it has a store finder that will give customers directions. It also includes games, so you can play right on the app and you can actually win loyalty points to spend at the store,” said Kolkhorst.

The app, which rolled out in early 2014, also interfaces with the Rattlers Rewards program, offering customers points for fuel and in-store purchases that can be redeemed at Rattlers. Designed in partnership with KickBack Rewards, the loyalty program debuted in July 2013.

“Rattlers may not always be your cheapest option, but we do try to be the best and give the best service,” Kolkhorst said. “The loyalty component gives customers something extra for shopping with us.”

Customers, for example, can gain two points per gallon of gas purchased, which is added to their loyalty card. Kolkhorst said. Customers also gain two points for every dollar they spend inside the store.

“We have customers who have hundreds of dollars on their Rattlers Rewards card. It has been a good program for getting customers to be loyal to the Rattlers brand,” Kolkhorst said.

While the mobile app doesn’t offer mobile payment yet, Kolkhorst has no doubt it’s coming someday in the near future.

“We’re Exxon-branded as well as Shell- and Valero-branded. Part of the Exxon EMV-1 platform is getting ready for mobile payment technology, so I can see that mobile payment will be the next natural transition, particularly for our Exxon locations because we’ll be equipped to handle it,” Kolkhorst said. “Mobile payment is coming and convenience store operators are going to have to be on the cutting edge. Those that resist are going to miss out on a large segment of customers.”

On the heels of its electronic additions, the chain recently hired a marketing director to help it find better and more attractive ways to communicate with customers.
“I felt we needed to focus on better point-of-purchase, on-site merchandising, better pricing communication, and overall clearer communication with our customers,” Kolkhorst said. “With our new marketing director, and with our app, Website and social media pages, we can now communicate more efficiently and effectively with customers than we have in the past.”

Rattlers Trajectory
Rattlers was founded by Kolkhorst’s father, James “Bubba” Kolkhorst, who began driving a fuel truck for the Exxon consignee in Navasota, Texas in 1962. He split time between running the family dairy operation and managing the Navasota Bulk Plant until 1972. At that time, Exxon promoted him to become the consignee for the Navasota plant. In 1982, James Kolkhorst purchased the Exxon Distributorship and founded Kolkhorst Petroleum, which was a wholesale operation selling gasoline, diesel, oil and grease products to agricultural and industrial customers in the Brazos Valley. It also serviced Exxon-branded stations in the area.

“By the early 90s, Exxon’s management kept telling my dad, ‘Look, if you plan to solidify your supply, you’re going to need to run your own stores and not just rely on dealer accounts to grow your business.’ So in 1992 my mom, Vivian Kolkhorst, and my dad bought a piece of property and built a convenience store in College Station, Texas,” Kolkhorst said.

The first store in College Station was relatively small, measuring about 1,500 square feet on a corner lot encompassing less than a quarter of an acre.
Shortly thereafter, the Kolkhorsts acquired a store in Navasota where its company headquarters are located, which they razed and rebuilt. When complete, that c-store measured about 2,500 square feet.

“Those were our first two convenience stores,” noted Kolkhorst, who joined the company in 1994 and took over as president when his father retired in 1997.

Today, Rattlers is set to renovate its Navasota location, taking the building from 2,500 square feet to about 4,000 square feet. “The expansion will allow us to include bigger restrooms and open the store up more, utilizing space that used to be reserved for daily operations and increase the size of the sales floor area,” Kolkhorst said. “We’ll also rearrange the front cashier area, so it’s more customer-friendly.”

A Rattlin’
The Rattlers name didn’t come about until 2004. As the company grew, it collected a number of stores, all under different names, such as Jim’s Express Mart and Tiger Town Exxon.
“We had all these stores operating under different names and it was difficult to market any continuity of ownership,” Kolkhorst said. “In 2004, we decided to create a common name and image. We were looking for a one word name that rolled off the tongue and was easy to remember.”

“Rattlers is not a snake,” Kolkhorst said. “If you look at the logo, it’s two deer fighting. We are big hunters in our family and big outdoors people. When you hunt deer, you may use rattling horns to call deer. This hunting technique is called “rattling”…and that’s how we came up with the name Rattlers.”

Rattlers continued to grow its store count to 14 stores, where it remained until early 2014, when it sold three locations it had operated on the Texas A&M campus.

“It was an opportunity we had in 2007 with a five year contract. Recently A&M outsourced its foodservice operations, and typically a food operator on a college campus also runs the convenience stores, so there was some conflict between us and the food operator,” Kolkhorst said. “It became apparent one of us probably needed to do something different, so they purchased our campus stores from us in May.”

Now that Rattlers is down three stations, the Kolkhorsts are looking to expand. Already, the chain has one location under construction, and is eager to add additional locations. The latest store under construction will be 3,800 square feet and will feature all the latest Rattlers amenities. It is located in a rapidly growing area in south College Station.

Growing Upward
As Rattlers continues to grow, Kolkhorst plans to continue to set the chain apart by working to master the little details, and continuing to build and foster community relationships.
“I’ll tell you what differentiates our chain. We like to do business in rural markets. We understand doing business in small towns. The difference between Rattlers and a lot of our competitors is that we give back to the communities we operate in and our customers know that,” Kolkhorst said.

From sponsoring sports teams, school events, community festivals and county fairs, Rattlers goes above and beyond when it comes to being a good corporate citizen, and its efforts make a difference to the chain’s loyal customers.

“Giving back is part of what we do, and it is part of why we’re successful. The folks who do business with us see that,” Kolkhorst said. “Although we might be a couple cents higher than the station down the street, our customers know we give more than that back to the community. That makes a difference, it really does.”

Good service and orderly appearance are just two of the calling cards of Rattlers, and an invitation for customers to keep coming back.

“We also like to think we run very clean convenience stores. As basic as that might seem to be, it is the hardest thing to do in our business and not everyone does it well,” Kolkhorst said. “We think we do that really well. I think that consumers are always looking for a store that is well lit, that is always inviting, friendly and clean, and has the latest well-maintained equipment. Our fantastic employees have bought into our motto of Friendly-Clean-Texan and deliver top notch service every day. You will always hear a ‘Welcome to Rattlers’ when you enter one of our locations. As long as you are continually performing those basic fundamental components of the c-store business you’re going to get your share of customers.”

Even though it aims to grow its fleet of stores, Rattlers historically avoids acquiring convenience stores. “That’s often times the quickest way to grow, but you might inherit other folks’ problems. I typically like to find the right location and then put the type of store that we would like to have at the location,” he said.

For now, Rattlers is seeking organic growth. “We’re going to grow one store at a time, 2-3 stores per year. We don’t have a magic number of stores that we are trying to reach. We are just trying to make sure that every store we put on the ground we’re proud of,” Kolkhorst said.

Rattlers At a Glance

Founded: By James “Bubba” Kolkhorst, who started Kolkhorst Petroleum in 1982. Rattlers became the name of the c-store business in 2004.
Number of c-stores: 11
First c-store: 1992 in College Station, Texas
Food: Testing a grab-and-go food program, plus five Burger King franchises.
Growth: Renovating Navasota location and building a new location.
Recognition: Kolkhorst Petroleum was picked to be one of Inc. 500’s top 5,000 small businesses both in 2007 and 2008. Rattlers was recently named the ‘Best Convenience Store in the Brazos Valley’ for the sixth year in a row by a publication in Bryan/College Station, as well as the favorite convenience store in Giddings and Navasota, Texas by their respective local newspapers for 2014.
Motto: Friendly-Clean-Texan