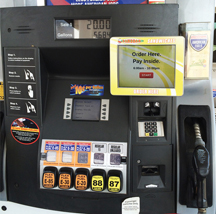 Zarco USA gains sales from fuel customers with touchscreen ordering that allows patrons to order their favorite foods while filing up their tanks.

Scott Zaremba, president of Lawrence, Kan.-based Zarco USA this past May rolled out touchscreen ordering at the pump at one of his nine convenience stores, with plans to expand the program to all his locations within the next 90 days.

Currently, customers can use the touchscreen, which consists of a tablet fitted to an existing pump, to place an order from Zarco’s Sandbar Subs or Scooter’s foodservice lines, but soon customers will also be able to place orders for a number of popular c-store items, such as candy bars, right from the screen.

“We’ll slowly start bringing in—not everything—but about the top 15 SKUs. We’re expanding as we go, so we’re just finishing adding the big order food items and then we’ll add the other c-store items as we go. We don’t want a million choices, but we will offer the main items customers want,” Zaremba said.

The new pump-based ordering is significant because it opens up a whole new revenue stream. “This is like the drive-through was to restaurants,” Zaremba said. “Prior to that you had to walk into the restaurant and sit down and order what you wanted. Then drive-through changed the restaurant industry totally. We think the same thing is going to happen with ordering at the pump because now customers are able to order whatever they want. Plus, we’ll be able to evolve that to even offer things off site, where customers can order anything from anyone anywhere, if we decide we want it in our system and that we can produce revenue from it.”

The screens also solve an ongoing issue for c-stores in getting gas customers to purchase product inside the store.

Zaremba partnered with technology expert Peter Tawil to develop the cost-effective and durable tablet that installs onto existing fuel dispensers. The two worked together for months developing and testing the tablet and ordering app.

The final product is called Siris, which is currently in its second version. Siris consists of a user-friendly ordering APP running on a UL-certiﬁed, 10-inch gas pump tablet. Siris can be set up for email conﬁrmation or integrated into an existing point of sale (POS) system.

“We’ve been working on it for the last five years. This is the second version, and now we’re in the process of tweaking this second version before we roll the rest of the screens out to our other stores, ” Zaremba said.

Currently customers place their order on the tablet touchscreen, customizing their sandwich as they go and entering their name at the end of the order. To receive their order, customers enter the store or go through the drive-through.

“In the next version, we’ll have a card swipe on it so they can pay at the pump also,” Zaremba said. Siris technology is set up to allow for payment inside the store, as Zarco currently offers, or at the pump via credit card reader or QR code display.

Because touchscreens are prevalent and simple to use, customers have adapted quickly, Zaremba said. At Zarco USA, Zaremba has also added signage to help customers understand what the screens can do.

Siris is now also available for other retailers, should they want to add touchscreens to their gas pumps as well. The entire Siris program comes complete with a tablet, ordering APP, back-ofﬁce reporting and online monitoring. Each unit is constructed to withstand the fuel station environment, and is manufactured with a tough, weather-resistant aluminum enclosure with a protective glass overlay. 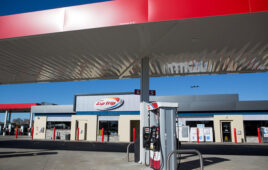