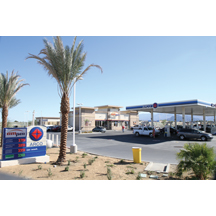 Nachhattar Chandi began his c-store career as a cashier. Today he owns and operates 17 convenience stores and counting.

Nachhattar Chandi’s entrepreneurial journey from his start in a small village in India to a U.S. c-store cashier, to a successful c-store franchisee and owner of Chandi Group USA is a testament that the American Dream is alive and well.

Chandi moved from Uttar Pradesh, India to India, Calif. in 1991 in search of new opportunities. Twenty-three years later, with 17 ARCO ampm franchises, six car washes, three Del Taco quick-serve restaurants (QSR), one Subway and new c-store construction plans, all under his belt, Chandi is living the dream he set out to find. He’s also reaching out to neighborhood kids, helping them realize the same success.

Humble Beginnings
When Chandi arrived in California, he began work as a convenience store cashier. A few months later, he was promoted to manager.

Three years after that, when the store was shut down due to an underground storage tank contamination issue, Chandi turned an obstacle into an opportunity.

“The state came up with requirements (for underground storage tanks) that the store didn’t meet. The trustee who owned the land decided to shut the store down. I knew the trustee attorney and I was able to convince him to give me a one-year lease,” Chandi said.

“I had only two coolers, one with Pepsi and Coke and one was a water door,” Chandi said. Store sales totaled $40,000 per month.
As part of the agreement, Chandi took responsibility for fixing the complicated contamination issue. “When I dug deeper into what it would take to fix the contamination issues, I thought ‘Oh, no, what have I done.’” But luck was on Chandi’s side again. The state of California had a state funded cleanup program in place for which Chandi’s store—called Black Gold Gasoline—qualified. “It took a long time to sort that out, but I made it through,” he said.

Ready For Growth
A few years later, Chandi faced another roadblock when he learned ARCO ampm aimed to construct a new convenience store a block from Chandi’s business. The competition would devastate his business. So the entrepreneur took action.

“I was nervous, so I called ARCO ampm, and I told them my location was better and that they should build on my property instead,” Chandi said. “At first they said they were too far into the deal with the other property to consider my proposal, but the rep agreed to meet me and see my location, and he agreed with me.”

The process to become a franchisee took two years. Then, finally, in 1997 Chandi got the call he was waiting for.

“They said you are approved and can have a franchise agreement,” he said.

Chandi purchased some land directly behind his convenience store. Then knocked down his 250-square foot store, to build a larger 3,250-square-foot ampm behind it, complete with eight gas islands or multiple product dispensers (MPDs) with 16 total fueling locations. ARCO ampm told Chandi to raze and rebuild would take 6-7 months. “I told them I can’t be out of business for 6-7 months, because I have to make a living,” Chandi said.

“I love building. I do everything construction-wise in-house and it has a lot of benefits,” Chandi said.

In 2002, he used his construction experience to expand again, buying a 40-acre property and constructing a truck stop with an ARCO ampm called Mecca Travel Center. The building measures 1,500 square feet and includes 24 fueling positions.

Now with 17 ARCO ampms under his belt, he’s named his business Chandi Group USA. Over the past four years he has been completing LED lighting retrofits at all his stores—again doing all the work in-house.

“I make it a point to add all the latest technology,” Chandi said “If you’re in an airplane at night passing overhead, if it’s not cloudy you can see the LED lights from my gas canopies. As soon as the LED lights started coming down in costs just as they were peaking in efficiency, I began adding them. I have three stores left to retrofit.”

Chandi not only adds LEDs to the forecourt, but also inside the stores. “When you walk into most ARCO ampms, everyone has the same program with the same signage and graphics, but I use digital signage with LED lights behind it. It creates an extra ‘wow’ factor. Even my ceiling lights and cooler case lighting are LED. You won’t find any lights in my store that aren’t LED.”

Chandi’s 18th ARCO ampm is set to break ground in December, and another is scheduled for construction in the second quarter of 2015. The new stores will measure 4,000 square feet each, and the forecourt will feature 10 MPDs and 20 fueling positions—a far cry from the 250-square-foot space he started his career managing.

“In the last two years I decided not to build with less than 10 MPDs, meaning 20 fueling positions, and having an option for diesel at two pumps,” Chandi said.

Chandi is also currently in the process of acquiring a gas station. As he builds and acquires more properties, Chandi works closely with ARCO on design and floor plan changes.

“When you look at my buildings, they are different from every other ARCO. Ten of my stores are in the affluent Palm Springs, Calif. area,” Chandi said. “On the outside, I put a lot of stone on the buildings to give the stores an upscale look. In the parking lots I use black concrete instead of asphalt. And on the landscaping, I use date trees instead of palm trees.” 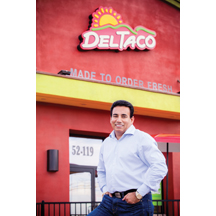 Nachhattar Chandi stands before one of his Del Taco restaurants.

Realizing that convenience store customers were demanding foodservice, he partnered with Del Taco in 2005, opening his first Del Taco franchise on the same property as his Mecca Travel Center.
After opening that Del Taco in 2005, Chandi continued to grow his QSR franchises as he expanded his c-store business to more locations.

Today he has three Del Tacos, two of which sit on the same property as his convenience stores, and another that’s a standalone QSR across the street from his first ARCO ampm. He also operates a Subway franchise to reach an even wider audience.
Chandi chose Del Taco because it fit his requirements of an established brand with food customers crave.

“Del Taco is a brand that has been around for 50 years and it is known for quality food. They are well established and do a good job with site selection,” Chandi said. “They also know how to work with the franchisees. After I first spoke with Del Taco about my desire to add a QSR, just nine months later my Del Taco was built and up and running.”

As a Del Taco franchisee, Chandi is responsible for the day-to-day operations of the business himself. He uses separate staff between his c-stores and Del Tacos, but his managers are cross trained in both businesses.

He finds the QSR complements ARCO ampm’s grab-and-go program, which offers food items, such as cheeseburgers, corndogs and hot dogs. Currently he plans to open a fourth standalone Del Taco in 2015. To support the foodservice business, each store features a massive 20-door cooler.

Community Focused
When Chandi arrived in the U.S., he spent two days in a local business school. “They taught us to make sure we work with our customers, pay our property tax and work with our community. I said, ‘That’s what I needed. Thank you!’ and I left.”
He took the lesson on community especially to heart.

“The kids are our future leaders. I try to get them off the street and give them jobs. I go to schools in the area and tell my story of where I come from and how I built my business. I tell them, you can be anything—an attorney, judge, senator, president,” Chandi said. “In this country, it doesn’t matter where you live, because there’s a bus that takes you to school and it doesn’t cost you $1. This is a country of opportunity,”

Chandi partners with local non-profit groups to support youth and seniors in the community. He offers local fundraising support in particular, including sponsoring a local baseball team, and $1 for $1 matching for local programs.

Mastering the Basics
At the end of the day, mastering the basics of providing a bright, clean well-stocked store with friendly service is what Chandi feels really puts him above his competition.

“You won’t find any dust on my floors or shelves, everything is always clean and organized,” Chandi said. “Whether you come to my car washes or my Del Tacos or my convenience stores, you will get a warm welcome from my employees.”

His advice to other retailers considering becoming a c-store or QSR franchisee is straight forward.

“Make sure you work with your franchise owner—it’s not a one way street. It’s a two-way negotiation with the franchise and franchise owner. Look for an established company that has been in business for 50-60 years,” Chandi said. “Other considerations include the store location, the community—you have to put all those pieces together. At the end of the day, becoming a success does not come from opening a business with a name brand, but it comes down to the location and the operator and the team behind the scenes.”