In honor of its 100th birthday this year, White Castle is ramping up its brand visibility with fun new merchandise made in partnership with other well-known and popular brands. It’s White Castle’s boldest step yet into co-branded activations that really dive into its history and culture.

White Castle, a fast-food and retail pioneer, has long had its online shop, House of Crave, selling everything from socks and aprons to water bottles and beanies. And White Castle has partnered with the celebrated New York City design house TELFAR to create several expressions of its team member uniforms, including a special collection for its 100th birthday.

But new collaborations with companies like PUMA, Funko, DGK and others are helping to bring the Home of the Original Slider to life for Cravers in new and unique ways.

“Their products really tap into the essence of White Castle,” said Lynn Blashford, chief marketing officer at White Castle. “We’re such a one-a-kind American brand, and thanks to these new partnerships, our Cravers can engage with our brand in one-of-a-kind ways.”

The White Castle collection, which also includes a hoodie, shorts, and various co-branded graphic T-shirts, will launch June 25 at PUMA.com, at PUMA’s flagship store in New York City, and in-store and online at the Foot Locker family of stores (Foot Locker, Champs, Footaction and Eastbay). An additional PUMA x White Castle collection will be released this fall. 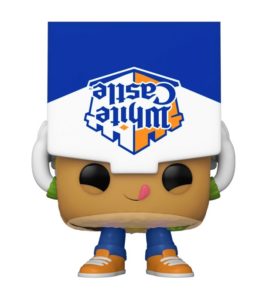 DGK, an American company producing skateboards and related apparel, is introducing a new line of products in conjunction with White Castle. It will launch late this summer.

White Castle is working with a host of other brands, as well, to develop more White Castle-inspired merchandise. The family-owned business has teamed up with Brandgenuity, its exclusive licensing agency, to make brand partnerships and collaborations a priority for its 100th birthday.

“We’re taking our brand partnerships to the next level with these and other activations,” Blashford said. “What better way to launch our second century in business than by feeding the souls of new and existing Cravers with distinctive new merchandise?”

Based in Columbus, Ohio, White Castle owns and operates more than 360 restaurants dedicated to satisfying customers’ cravings morning, noon and night and sells its famous fare in retail stores nationwide.